Whether it’s out of curiosity or necessity, you may be wondering if ATV tires have tubes in them or not. It’s a completely legit question to ask; in fact, I remember asking the same question myself when I bought my first ATV.

So are ATV tires tubeless or not? Almost all ATV tires are tubeless due to the downsides of running tubes in a low-pressure tire. You can install tubes in an ATV tire, but for most users, it is not the best alternative.

Why are ATV tires tubeless? (pros and cons)

Most if not all new ATV tires are sold without tubes. But why do the manufacturers choose this setup instead of using inner tubes?

Let’s have a look at the pros and cons of tubes vs. tubeless ATV tires and why tubeless ends up being the preferred alternative.

ATV tires run on low tire pressure for optimal off-road performance. For optimal traction and flotation on soft surfaces such as mud, snow, or sand, you may go as low as 2.5 psi to 3 psi.

Do not, however, go any lower as this will increase the risk of popping the tire of the bead.

When running low pressure in a tire, the tire is not being pushed as hard against the inside of the rim, causing less friction.

This makes it more likely that the tire will spin on the wheel during hard acceleration or hard braking.

When this happens, the tube wants to spin along with the tire. The valve stem, however, is fixed to the wheel.

This usually causes valve stem breakage and instant deflation. Plastic valve stems are more likely to break than one made from metal.

The steel valve stems on tubes are generally longer than on a tubeless tire. Partly so that they will work with multiple applications.

This leaves them vulnerable from breakage when riding in mud or from hitting ruts.

Farm tractors and forestry equipment, such as skidders, often use inner tubes.

To solve the valve stem breakage issue on these machines, they often use an impact-resistant valve stem protector made from steel.

So low pressure is no good with tubes. Why not use high pressure?

A tubed tire will be less likely to break the valve stem if you run higher pressure, but it will negatively affect ride quality.

Also, you will get less traction, as well as less flotation, wich both are important for off-road driving.

Flats don’t happen when the ATV is sitting in the garage; they occur on the trail or in the woods.

You’re likely miles from the nearest tire shop, so you will need a way to repair the leak in-field.

Tubeless tires are relatively easy to repair out on the trail. All you need to get going again is a string-plug tire repair kit and an air pump.

Tubed tires, on the other hand, cannot be patched easily out on the trail. The tire has to come off the rim for you to access and patch the damaged tube.

String plugs are generally not recommended as long term repairs, but they are great for emergency repairs for ATVs out on the trail.

Here is why string plugs shouldn’t be used on car tires.

ATVs tend to get leaks much more frequently than cars. Also, you are likely not running at the same kind of speeds on salty roads. Therefore, many riders choose to leave the string plug permanently.

Ideally, the string plug should be replaced with a patch and rubber stem combo as soon as you get home. We prefer using the pull-through style one-piece unit with a stem and patch portion.

Moderately sized all-terrain ATV tires are relatively cheap. If you’re trying to fix a leaking stock tire, you’re likely better off by just getting a set of new, similar sized tires instead of tubes.

The overall result will be much better. As a bonus, you get fresh new rubber and grippy threads, all for just a few dollars more than the cost of a set of tubes.

In this post, we are comparing the price of different types and sizes of ATV tires.

Can you put tubes in ATV tires? And should you?

Nothing is stopping you from putting tubes in your tubeless ATV tire. Its a solution that may work for some, but there are better alternatives in most cases.

In this post, we have a closer look at different methods for fixing a leaking ATV tire.

Can you put tubes in ATV tires?

Some leaks are harder to find and repair. A common problem people have with tubeless tires is that it keeps leaking air on the bead. In situations like this, it may be tempting to give in and get a set of inner tubes.

But is it ok to install tubes to fix a leaking ATV tire?

Yes, you can install tubes in ATV tires, as long as you can live with the downsides such as the risk of valve stem breakage and having to ride at a higher tire pressure.

But for most ATV riding applications, it is generally not an alternative we recommend. For fixing flats and leaks, there are much better alternatives.

You may need to make some modifications, such as putting silicone around the valve stem.

When considering tubes as an alternative to fix a tire leak, it’s a good idea to not only install the tube but patch the hole as well. Otherwise, you risk dirt getting inside the tire through the tear or hole.

A tubeless ATV stays inflated because the pressurized air inside the tire is pushing the tire walls out against the bead of the wheel, creating an airtight seal.

ATV tires often use low tire pressure for better off-road traction. If tire pressure is being dropped too low, the seal may become weak, and the air starts seeping out of the tire.

If you have ever watched a tire being installed to a rim, you may have heard the distinct popping sound when the tire seats to the rim.

Inside the rim, there is a small bump close to the tire bead. This bump goes all around the rim, one on each side.

When inflating the tire, it will pop over this bump before it rests against the inside of the bead flange.

Many believe that its this bump that keeps the tire inflated, but that is only half true.

The main purpose of the bumps is to prevent the tire from sliding sideways when cornering at high speeds or riding sideways in steep slopes.

This prevents the tire from deflating suddenly from a sharp turn or sideways impact. But for the tire to seal completely, you need a certain level of air pressure inside of the tire.

Some ATV tires have soft sidewalls that prevent a patch from holding up. Stiffer sidewall tires are not as exposed to this problem as they do not flex as much.

Sidewall tears are not supposed to be fixed in the first place. Tears in the sidewall may cause a blowout, and a tire with such damage must be replaced.

That being said, as an emergency repair, a tube will do a better job than a patch to stop a leak in a soft-sidewalled tire. Again, please note that this is not a solution we recommend as a long term repair. 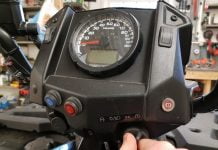 The ATV Is Not Getting Power or Periodically Loses Power 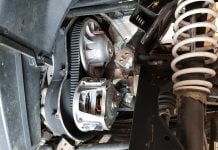 Why Does Your ATV Belt Squeal? How to Fix It? 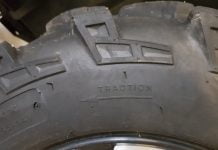 Are All ATV Tires Directional? How to Tell? 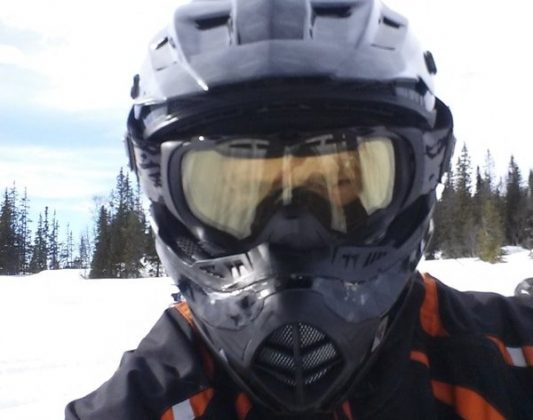 Hi, I’m Haavard, and I’m the guy behind Boost ATV. I grew up on a farm where ATVs have been and still are an important part of “getting things done”. I also enjoy the thrill and joy of the occasional trail ride. So I made this site to write about the things I have learned. Hopefully, you will find it useful!

BoostATV.com is a participant in the Amazon Services LLC Associates Program, an affiliate advertising program designed to provide a means for sites to earn advertising fees by advertising and linking to Amazon.com. This site also participates in other affiliate programs and is compensated for referring traffic and business to these companies.

Do You, Can You and Should You Balance ATV Tires? Best...

How to Replace / Install ATV Winch Cable or Synthetic Rope

How to Charge Any ATV or UTV Battery – All You...

Any cookies that may not be particularly necessary for the website to function and is used specifically to collect user personal data via analytics, ads, other embedded contents are termed as non-necessary cookies. It is mandatory to procure user consent prior to running these cookies on your website.