Anyone new to ATVs will, at some point, wonder how fast they can actually go. It’s not likely that you will be riding at these speeds very often, but it’s just one of these things we just want to know out of pure curiosity.

Or, maybe you are in the process of buying a new four-wheeler and just want to make sure you won’t get disappointed by the performance of the bike size you are getting?

For most ATV models, you won’t get these numbers from the manufacturers themselves. So I did a little digging to find as good of estimates as possible.

Today’s most powerful sports and utility ATVs can reach top speeds of 80mph (128km/h). Moderate sized bikes averages at about 65 mph (104km/h). Youth ATVs have speed limiters so that the parent can decide exactly how fast it can go.

These are the top speeds of the fastest stock ATVs I could find within each cc engine size. My research included all of the major brands.

To better understand what top speed to expect when getting a specific engine size, I’ve calculated the average top speed regardless of what brand you are choosing. I compare each manufacturer’s fastest model within each engine size.

Note that many manufacturers have several models with the same engine size, but where the difference in top speed between the two can vary with as much as 5-10mph. In this comparison, I’ve picked only the fastest of the available models.

At this point, you may be eager to know what make and model achieves these speeds.

Here are a data sheet showing how fast each model goes, based on reported user experience. Most but not all models are available on the market today.

For all practical purposes, as long as the bike does 50 MPH safely, you really do not need it to go any faster.

But if you decide to push it even further anyways, you will find that it’s neither comfortable, practical, or very safe. It also makes a severe impact on the fuel economy.

When you research different ATV models, you will notice that most manufacturers won’t state their machines top speed in their spec sheets (except with speed limited youth models to show how slow they can go).

And they have good reasons for not focusing on blazing top speeds.

ATVs are not designed very well to be used at high speeds. They are meant to be powerful at lower speeds and need big engines for this reason. But they are not meant to set any speed records.

The suspension is too soft, the tires are too aggressive, and the CVT transmission non-ideal for higher speeds. The relatively short wheelbase and spacing compared to a car do also negatively affect high-speed performance.

So the manufacturers do not want riders to be pushing to reach potential top speed on their machines, as it’s not what they are really designed for and could end in disaster.

Most manufacturers clearly give disclaimers similar to the one you find on Can-Am spec sheets: “Avoid excessive speed. ” They do so for a reason.

If you’re looking for speed, a motorcycle or a fast car is a much better option.

But what about quad racing?

Racing quads are equipped with upgraded suspension, have a wide tire width, and are ridden by experienced riders. These cannot be compared to your average stock utility or recreation bike.

Some sports models have better suspension from the factory, but it is still not a machine meant for chasing high speeds.

You will find different types of speed limiters installed on many of the ATVs on the market for various reasons. You’ll even find this on “unrestricted” top performance bikes like the Polaris Scrambler.

But the real purpose of why they are installed varies somewhat depending on what type of bike you are getting.

You’ll often find that it’s not actually the engine size (displacement) that’s the limiting factor of how fast the quad goes. There is usually plenty of power available for even higher speeds.

But the speed needs to be restricted at some point to protect those of us that don’t understand the extreme dangers involved with doing these speeds themselves. So they install limiters.

The same is true in most cars, motorcycles, and any other high performing machine. Usually, they are set to a speed so high that it is not something one would ever notice for the average user. You will never be going this fast anyways.

But it helps to explain why there are noticeable variations in top speed on quads with identical engine size but from different manufacturers in some cases.

You will even find bikes with smaller engines that outrun the bigger ones. Often this is likely due to a limiter set at different maximum speeds.

I strongly advise against messing with the top speed limiter on these bikes. It is there for a good reason!

A limiter can be either mechanical or electronic or both

A mechanic speed limiter uses a mechanical barrier to prevent you from applying full throttle.

This can be in the form of an adjustable screw on the handlebar, plastic parts inside the carburetor, or shims limiting airflow in various places inside the engine. Other types exist as well.

Electronic limiters are typical on bikes with electronic fuel injection. The fuel injection system gets notified to cut back on fuel as soon as the ATV reaches the set limit.

Speed limiters are installed on children’s and youth ATVs as a critical safety feature to protect beginners and inexperienced riders.

Some bikes come with adjustable limiters so that the parent can increase speed gradually as the riders riding skills and experience increase.

Most of the smaller sized ATVs are capable of speeds in the range of 30 mph with some light tuning, removing speed limiters, etc.

I’m not telling you this because I advise you to do so but so that you’ll understand why there are such significant variations in the top speed of the presumably identically sized smaller bikes. It is, in most cases, not due to huge variations in actual engine performance.

For older beginners, Can-Am includes a learning key that holds a code that electronically limits the bike’s speed. This is a great safety feature I hope more manufacturers will offer in future models.

When you install tracks on the quad, you give up a lot of the speed at the same time. As a general rule of thumb, you may expect the top speed to drop by about 50% due to the sprockets’ different output ratio.

Because of this, the internals of your bike needs to move twice as fast to maintain the same speed when running in the same gear and with the same RPMs.

It’s wise to keep this in mind when you’re chasing top speed with your new tracks. It put a lot of strain on your gearbox, diffs, and CV-joints.

How to increase top speed

If you, despite the warnings, still wish to increase your bike’s top speed, there are several ways you can go about it. Disclaimer! All modifications are done at your own risk! I do not recommend any of them.

Bigger tires have a larger circumstance, which means the tire travels farther pr. revolution. This will effectively increase the top speed of your bike.

Remember that you also need to install a clutch kit if you increase tire diameter by more than a couple of inches. If you don’t, you will lose a lot of power and may face belt slipping issues and burning belts.

If your bike has a gearbox with sprockets and chains, you can change one of the sprockets to increase your top speed. However, this is actually most commonly done to reduce top speed and simultaneously improve acceleration by installing a smaller sprocket.

By installing a racing clutch, you can choose one that uses different dimensions of clutch sheaves, altering the bike’s top speed according to your needs.

I won’t go into the details on how to increase the power output of your bike’s engine, as this subject deserves a post of its own. But doing so will also give you an improvement of top speed.

This one is quite obvious, but removing it will improve your top speed if your bike has any speed limiter installed. Be aware you may be voiding your warranty and breaking a few laws if you decide to go this route.

Mechanical speed limiters are the easiest to remove as they usually require you to slightly disassemble and remove the part that is limiting your throttle.

However, if your bike has an electronic speed limiter, you may need reprogramming of the bike to disable the limiter. Some dealers do this for you; others don’t.

For my Polaris Sportsman XP 1000, there wasn’t any software available to remove its top speed limiter of 60km/h (37,3 mph). This particular bike is sold as a tractor required by law (Norway) not to go any faster than this.

People into quad racing tweak gearing ratio to find the optimal setup for each track they are racing.

As I mentioned, most bikes will actually have an electronic speed limiter to prevent riders from attempting speeds much higher than the machine is really designed for.

The limiter on Polaris Scrambler XP 1000 kicks in at about 80mph, but there have been reports of people reaching speeds in the range of 100mph simply by flashing new software to their bikes ECU.

The Scrambler XP 850 even has a higher stock top speed, with the limiter reportedly set at 83 mph.

Again, I strongly advise against doing these modifications. And quite frankly, I don’t really see the point of it unless you are into some serious racing. And don’t get me wrong, I love speed. Just not these kinds of speeds on an ATV.

What is the fastest ATV in the world?
According to the Guinness book of world records, the fastest speed ever achieved by an ATV was 196.19mph (315.74 km/h). The rider was Terry Wilmeth, and the bike was a modified Yamaha 700 raptor. Fitted with a hybrid rocket thruster. 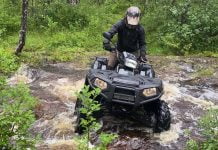 Are ATV Tires Tubeless? Tubes vs. Tubeless (Pros and Cons)