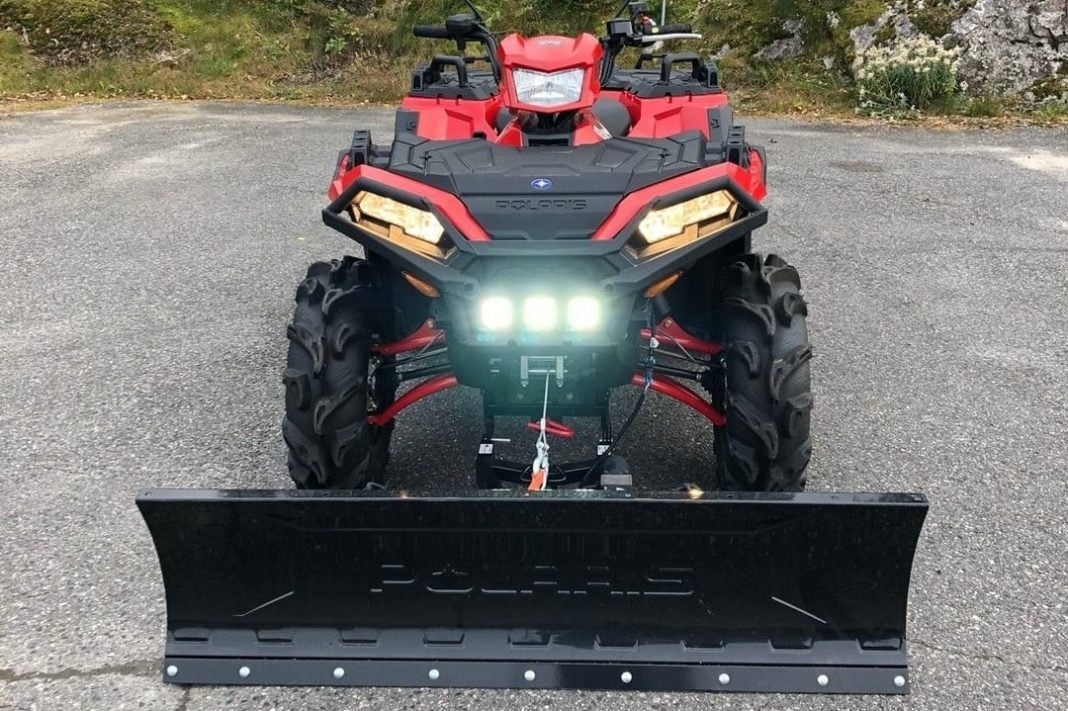 Snowplows are one of the most popular accessories people get for their ATVs. They offer a simple way of adding some practical value to a machine that otherwise would be used just for fun and recreation.

But before you go ahead and spend some of your hard earn money on a brand new plow, it’s a good idea to learn some snowplow basics.

So, how do ATV snowplows work?

In short, an ATV plow works by pushing the snow with a wide blade attached in front of the ATV. The blade can be made of either metal or strong composite material. The blade can be raised or lowered using either the ATV winch, or it can be done manually.

The design and construction features of an ATV snow plow

ATV snowplows are fairly simple designs, where there is not much that can go wrong. Any plow will push snow.

But if you take a closer look, you’ll notice some key design features that separate a good from a not so good plow. These basic components that make up an ATV snow plowing system play their own part in a successful plowing job.

Any ATV plow needs to be mounted securely to the bike with a mounting frame. The frame needs to be strong and well suited for the specific bike it’s being mounted to.

Dry, light snow can be plowed with ease without putting almost any strain on the plow or the ATV. But as soon as you get into some of the wet and heavy, or even some icy snow, the beating that needs to be absorbed by the plowing system can be quite substantial.

Unintended smashing into hidden rocks or getting hung up on frozen gravel will put even greater stress on the frame and will make a short life of a poorly built snow plow mount.

If you use a mounting frame that is not well suited for your bike, you can even risk inflicting permanent damage to your machine.

In addition to being strong and secure, the mount needs to be made to be installed or uninstalled quickly through the season because most users prefer to remove the plow when not using it.

Ideally, the whole frame assembly should come off easily as well, so that you don’t end up leaving it on all through the warmer seasons.

Some bikes feature OEM mounting points in the front of the frame specifically designed so you can attach accessories like a snowplow.

If your bike has this feature, you should look for a plow designed to be used with this mounting system, as this will definitely give you the best results.

If your bike does not come with an integrated plow mount, you are best off getting a plow with a vehicle-specific mounting kit or one with a universal mounting assembly.

Look for a mount that attaches directly to the bike’s frame for a more robust result.

The frame assembly also knowns as the push-frame contains the mechanism that allows you to rotate and adjust the plow blade for optimal performance in different plowing situations.

The most common type is a fully manual system where you pull a lever to free the blade to rotate by hand to the desired angle. This is a cheap and bulletproof mechanism where little can go wrong.

Some plows even feature hydraulic tilting and lifting of the blade. While this is very convenient, it does add some weight, cost, and installation time. If you plow professionally, the added convenience may make it the right choice for you.

Regardless of what mounting system the plow comes with, it should be made so that the blade can be lifted from the ground when not plowing and lowered again when plowing.

How much money you are willing to spend usually determines the effort needed to lift and lower the blade.

Your options range from fully manual systems that require you to get off the bike each time you want to lift the blade to automatic systems that are much faster and more effective.

A system that utilizes the bike’s front-mounted electric winch for lifting the blade up and down is by far the most common. It gives you the ability to lift the plow from the driver’s position without adding too much cost and complexity to the system.

If your bike does not already have a winch and is not willing to spend the money to get one, you should look for a system that uses a mechanical lever to lift the blade instead of a winch.

If your lower back can handle it, you can save some more by getting a plow that requires you to get off the bike and manually lift it with your bare hands.

At the other end of the scale, you find hydraulic systems.

These will not only allow you to tilt the blade by the push of a button. The hydraulics can also lift and lower the blade from the driver position. This is commonly named a direct lift system and is what most professionals prefer.

The blade itself is the most important component of the plowing system.

ATV plow blades are either made out of steel or strong composite material. Both material types have some pros and cons to consider.

Steel will eventually rust, no matter how well you take care of it. At the same time, it is a bit more rigid and durable than the composite blades. The latter type has the advantage of never rusting and has a slick surface that helps snow slide over the blade more easily.

Blades are built with a curve so that the snow will move in a rolling motion when you push the snow forward, almost likes scooping ice cream.

This rolling motion requires a lot less force than just pushing it with a straight blade and makes pushing the snow to either side a lot easier.

Tilting the blade either to the left or right will be your best option whenever plowing driveways or even when clearing larger open spaces like a parking lot.

With the V-shaped blade, you also get the ability to set up the plow in a more traditional arrowhead shape. This will allow you to slice through even deeper and harder snow than with a straight blade.

You can also reverse the V, creating a scoop to make stacking the snow easier. This will keep the snow straight in front of you as you drive forward.

For the average home-owner, straight blade style plows are overall very popular as they are generally lighter and does not cost as much as a V-plow.

Choosing the ideal blade width for your bike is crucial to get a good result. The bike’s weight combined with what snow conditions you plan on using the plow is what determines how wide it should be.

With a too wide blade, the ATV will struggle to push the snow due to a lack of traction effectively.

On the other hand, a too narrow blade will make the plowing process take a longer time, and you also risk compacting the snow if the blade is narrower than your bike’s tire width.

As a guideline, you should pick a blade that fully covers your bike’s tire width, plus a couple of inches on each side. Then adjust for what plowing conditions you expect getting into.

At the bottom of the blade, you find a scrape blade made out of steel. This piece will wear over time but is replaceable when needed.

This part of the plowing system will prolong your plow’s life expectancy by ten-folds and helps to keep a sharp edge for better cutting through any packed and icy snow.

If you plow many hard surfaces like asphalt or concrete, this part will wear quicker than on softer surfaces like gravel roads or dirt. Adjusting the flotation shoes optimally will prevent premature wear.

Underneath the plow blade, you will find a set of flotation shoes, one on each side of the blade. Without this crucial design element, you would find yourself digging the blade into the ground with the risk of damaging both the surface you are plowing or even the plow and ATV.

Different plows use different styles of flotation shoes, but circular discs are very common. They all serve the same purpose of maintaining a constant distance between the ground and the plow’s bottom.

Most plows are built to rotate down and slide over the object to prevent damaging your gear if you hit any unseen objects under the snow.

Powerful springs hold the blade in place when plowing normally, and the blade will not flip until you exceed the “holding power” of these springs.

When plowing icy or compacted snow, gravity alone may not be enough to keep the blade from just floating on top. To overcome this challenge, you can install a so-called down-force kit.

The kit utilizes the power of a simple hydraulic cylinder like the one you find on your car’s back door to push the blade down. Cheap and simple!

Should you build a DIY snow plow?

Due to the simplistic design, it can be tempting to take on building one as a DIY project.

But considering the high chance of messing up if you get one or more of the design features wrong, together with their relatively moderate purchase price, you might as well get one that is already made.

Optimized design and construction will give you much better plowing results at the end of the day.

How much does an ATV snow plow cost?

A new ATV snow plow cost anything from $300 to $800, depending on factors like build quality, material quality, blade width, and whether it comes with advanced features like hydraulics. 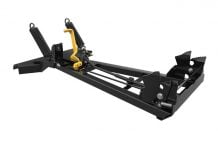 Are ATV Plows and Plow Mounts Universal or Model-Specific? 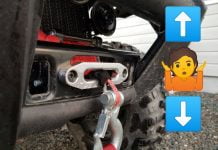 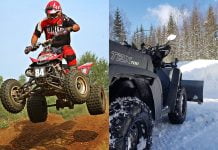 Why Aren’t All ATVs Four Wheel Drive? 2wd vs. 4wd

What ATVs Are Shaft Driven, and Why? Which Are Not?

Common reasons why your ATV is smoking